Since there are so many excellent blogs on baking and cooking…I decided to focus my food blog on ingredients and kitchen equipment that I have overcome my fear of using in recipes.

The first blog is about my most favorite herb, cilantro. Cilantro brings out strong emotions – people either love it or hate it. Many years ago I purchased cilantro dried in a jar and it tasted like soap. I couldn’t understand what the flavor of soap could add to a recipe and dismissed it from my life. But, I live in Colorado where there is a strong Mexican influence in restaurants and cooking here and cilantro is a big part of that.

Cilantro is the leaf of the coriander plant and is commonly referred to as Chinese parsley. It is used in Egyptian, Indian, Southeast Asian, Chinese, Mexican and Peruvian foods.

I overcame my fear of cilantro when I saw Rick Bayless make a pico de gallo shrimp taco on the beach somewhere in Mexico. I was excited that the recipe was so easy to make and he used fresh cilantro.   The flavor of cilantro is pure and it brings out the best in all the flavors of the pico de gallo – the tomato, red onion, salt and lime. YUM. My family was hooked and so was I. 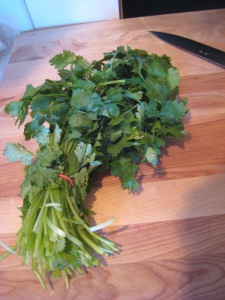 Cilantro can be found in my supermarket year round just like parsley. I have never been adept at growing it, but I know people who are. When I purchase it at the store I rinse it off, shake off the water, wrap it in paper towels and store it in plastic bag container specifically for produce. It keeps in the hydrator of my refrigerator for about a week.

When I am ready to make pico de gallo, I rip off a handful from the top of the bunch. I don’t use the stems and use only the leaves for chopping. I roll the leaves up together before I start chopping. 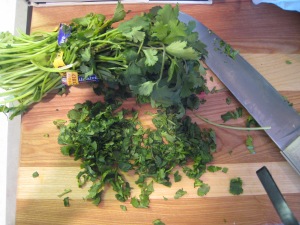 And I chop over and over in different directions until you get small uniform pieces.

Here is my pico de gallo – sorry the cilantro is buried and if I was a “super” cook I would have had the cilantro on top of the red onion. This is how I store it in the refrigerator. Then when it is time to serve, I mix the ingredients (squeeze the lime to taste) and serve with tortilla chips. 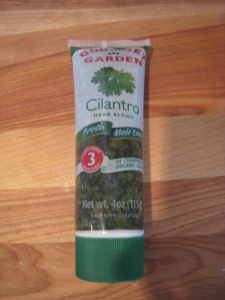 As you can see, cilantro can be found pureed in a tube. I will probably use this if I am making something like Pad Thai, a dish where the cilantro gets added at the end to add flavor.

I will probably never buy dried cilantro. That flavor of soap still lingers in my memory.

7 responses to “Cilantro – An ingredient not to fear”