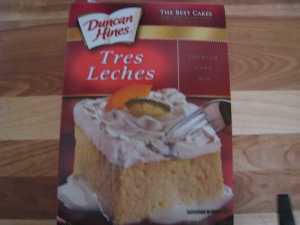 I was in Super Walmart a couple of weeks ago, picking up odds and ends. I wandered over to the baking aisle and this cake mix caught my eye.  Tres Leches cake. I had only heard of it a couple of years ago when at a graduation party. Living in the Western U.S. for the past 25 years I have embraced the food, faith and history of the Latino-Mexican culture.  With Cinco de Mayo just a day away, I had to give it a try.

It has an interesting, but conflicting origin to its history. Many references remark that it gained popularity in Latin America as a recipe on the side of the sweetened condense milk and evaporated milk can. Other references site it’s origins to Nicaragua, Guatemala, Cuba, Puerto Rico and Mexico.

It is a sponge cake. A regular baked cake, saturated with milky goodness – three milks to be exact. Evaporated milk, sweetened condensed milk and whipping cream. 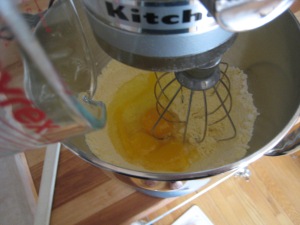 So, following the recipe is standard: yellow cake mix (1/4 C flour added for high altitude baking) eggs and water. Mix and pour into a 13 x 9 inch greased and floured baking pan. Bake then cool for 10 minutes.

Because I was following a cake mix, it called for 3 1/2 C milk that were mixed with a packet of powdered milk that turned into a syrup. 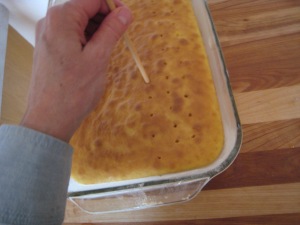 Poke holes in the cake about 1/2 inch apart. Then pour all that milk until the cake has soaked up every last bit of it. 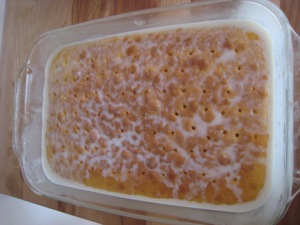 Frost with whipped cream. Then decorate with fruit of any kind. 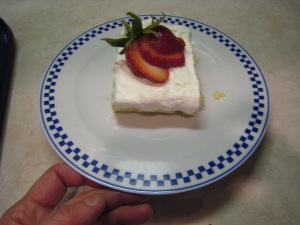 What did the Fearless Cook learn?

After searching several websites I looked for an authentic recipe. I found the What’s Cooking America website to give a little history and a scratch recipe.  http://whatscookingamerica.net/History/Cakes/TresLechesCake.htm    The website was very helpful as the cake mix didn’t give a lot of direction on how to frost, decorate or serve the cake. I could easily have made this cake from scratch, but then I wouldn’t have gotten my post up for Cinco de Mayo!

I was amazed at how milky it really was and the cake didn’t fall apart! I even drained off some of the milk as it overly saturated. And it was delicious. My husband wanted pie on Sunday night, so I bought him a pie and I made this cake. He skipped the pie and had two servings of the cake!

One website showed a beautiful two layered Tres Leches cake. The “easy” recipe they touted was to bake two yellow cakes in 8″ round pans, stack together, poke holes through the cake and then pour the three milks in to soak. I don’t know how they got that cake to stand alone with all the milk in it and then whipped cream frosting and decorated. Oh well I guess I’ll have to give it a try.

If you follow food trends, you’ll find that 2011 is the year of coconut water. It is the equivalent of nature’s Gatorade. It has twice the amount of potassium than a banana providing energy replenishment and youthful benefits.  Madonna supposedly drank it during her recent concert tours. She is the queen of staying young as she ages. She invested 1.5 million dollars in a Brazilian coconut water company Vita Coco.
What up with coconuts? Are they nuts or are we just cuckoo over them? Marco Polo called them Indian Nuts in 1280. Then Portuguese explorers called them Coco because the brown hair exterior reminded them of a ghost/witch named Coco.  They are not a nut, they just look like one. Instead they are dry drupes. But enough of this formality.
With all this interest in coconuts, the Fearless Cook took on this challenge. The goal was the adventure.
There are two kinds of coconuts the young and the old. The young ones are green  where the fountain-of-youth water comes from. The flesh from the green ones are supposed to be more flavorful. I looked online and found coconut farms where you can actually buy or invest in green coconuts for the water.
Then there are the mature coconuts that most people are familiar with. You can use the flesh shavings for recipes or it can supposedly be processed into a coconut cream consistency.  To select a coconut pick one with a round shape and a rich brown color. Shake it by your ear to listen for the coconut water inside. And avoid coconuts that have moldy or dark eyes. Sounds like a Coco witch to me! 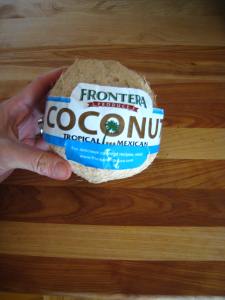 The next step in this coconut adventure  was opening it. This is where the fun begins. I read in The New Best Recipe 2004 cookbook that one should use a cleaver to crack open the coconut. Okay, good reason to buy a knife. I didn’t own a cleaver until this challenge. 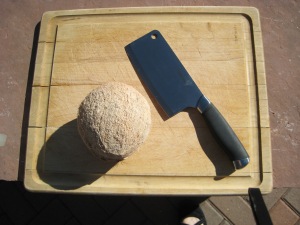 the coconut meets the cleaver

Thank goodness it was a sunny day so I could take my production outside to not harm man nor beast. 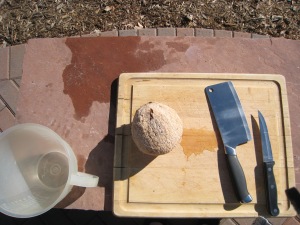 the coconut water is running away

As the pictures speak for themselves, one crack leaked out the water and didn’t open the coconut. I eventually had to get a steak knife and pry open the coconut. The cleaver was basically useless. I’ll keep it around for butchering a hog (not). 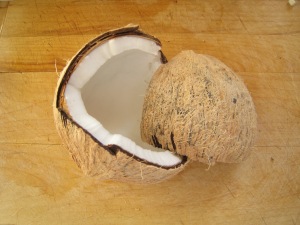 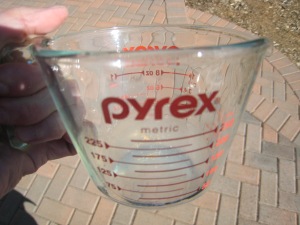 After this endeavor, I chiseled away at the coconut flesh. It was extremely difficult to get shavings out of it. Then I went to the Frontera Produce website, the brand that wrapped my coconut, and it did not recommend a cleaver at all. Instead, as the recipe below details, the coconut should be baked, for easy opening and to soften the flesh to be shaved like cheese.

This approach was helpful, somewhat. It did soften the flesh and I put it in a cheese grater. It was labor intensive and I got very little coconut shavings out. After all this work, Mr Coconut was thrown in the trash. Ba bye.

Place coconut in heat-proof container, cover and bake at 400° F for approx. 20-40 mins. Once coconut has cracked open remove from oven, discard coconut water, and remove white pulp immediately. This process is much easier when the pulp is still warm. Shave pulp chunks using a cheese shredder. Lay out on a sheet pan and toast coconut shavings at 400° F until dry and golden brown. Remove shavings and dust with powdered sugar.

After my coconut adventure, I saw a food show on the OWN network Anna and Kristina’s Grocery Bag. The show, first aired 3/11/2009 was their review of a Thai cookbook which recommend using fresh coconuts for the dishes they were preparing for a professional chef. The highlight of the show was their adventure into cracking open and using the water, milk and flesh from green and mature coconuts. Oh my gosh. It was hilarious. These women tried to open a green coconut with a hammer and nail. And the mature coconut was taken to the side of the road near a drainage grate and she beat it open with a hammer! I kid you not!

Kristina and Anna made five recipes and three turned out well. The professional chef told them to just buy the coconut milk and cream in the cans and forget about the fresh coconut.  I totally agree. 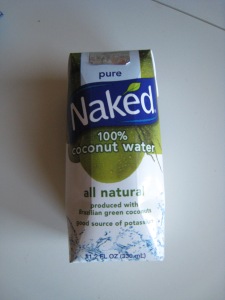 So going back to coconut water. I drank the quarter cup from my coconut and it tasted like plain Pedialyte (infant electolyte replacement formula).  Vita Coco has it in variety of flavors. Most recipes have it as an ingredient in smoothies. It is pricey at about $3.00 per container. If I start drinking it daily, I’ll report back on my youthful transformation (or not). Madonna and I are a year apart in age, she’s older.