I haven’t blogged in a while.

I’ve been pre-occupied for most of 2014…with deciding how and when to quit my job.

I’ve spent a lot of time thinking about this.

But I did it…and I am free of the insurmountable amount of stress I was experiencing.

Six years ago I started to make plans to go to Italy.  Here’s the proof. 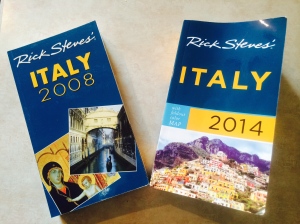 Quitting my job and planning for Italy all happened in six weeks. 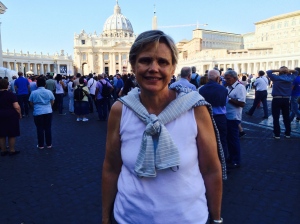 Over the past year, I kept reading about fear, taking chances, freeing oneself from obstacles, being true to yourself, being closer to God, being more spiritual, and living the life you want. Reading the stories and tributes brought tears to my eyes. I knew I needed to make a change but felt stuck.

With the support of my dear husband, Bob, I was able to move forward.  My journey is told in what moved me in the pictures below.

The beauty art and loving God. 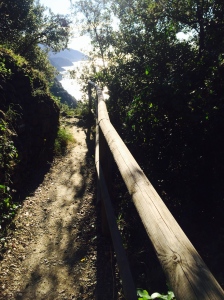 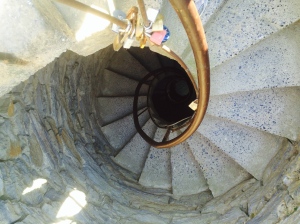 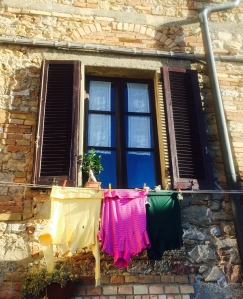 The windows and clean laundry

The ride on cobblestone streets. 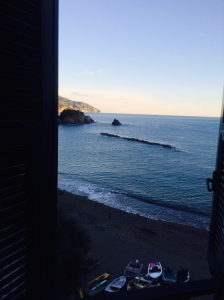 The beauty of nature from my window.

If you are reading this and you’re stuck in your life: keep the faith, read, learn about yourself, pray, meditate, connect with colleagues and friends, and listen to life stories.

It’s the middle of the afternoon, I just finished lunch. The gum I’m chewing just isn’t cutting it. I scrounge around my desk drawer, then my purse. I’m looking for a lost M&M or Smartie that may have dropped out. But alas, the mining expedition came up dry.  I chew a new piece of gum to keep the taste buds happy. Running to the vending machine will waste time. Get on with it, get back to work.

It’s been a couple of weeks ﻿since Valentine’s day and I’m still thinking about candy. There are four holiday events during the year when the candy has themes and is overflowing entire aisles devoted to: Halloween, Christmas, Valentine’s Day and Easter. From October to April it is candy, candy, candy. It’s one holiday rollng into another and the candy is plentiful.

At my Weight Watchers meeting, the leader admitted she was a sugar-holic. She described how she was told that the only way to get over her addiction was to go to the candy aisle and confront the sugar. She failed miserably because she left purchasing bags of candy. Going near the candy aisle was the equivolent of being an alcoholic, you can’t have just one Snicker bar.

I’ll admit I never thought too much about candy until it was always around. I have a friend at work who will slide me a bag of sour gummies or Willy Wonka Nerds. I guess that is how any addiction starts; it is a socially acceptable introduction. It breaks up the monotony of the workday. Everyone is doing it.

Most people need to watch what they eat and I am one of them. I can’t eat on a unlimited basis because it takes me down a spiral of unhealthiness. Being overweight took a toll on my ego many years ago. I climbed out of that hole but, it is a day-to-day challenge. It takes a great deal of discipline ﻿from deep down inside me to temper the cravings.

There is something about that sugar rush on my tongue. It’s like a party in my mouth. I become unconscious. And then I get sick. Why did I eat that?

My name is Patty and I’m a candy addict.

It’s being in a crowd of people and you don’t acknowledge those around you.

It is eavesdropping on conversations that aren’t being shared with you.

It’s when you are not recognized by others.

It’s when you shut the door and no one dares to knock.

In high school I wanted to be invisible. If Harry Potter cloaks were for sale I would’ve sold my soul to buy one. The fear of being made fun of was greater than being noticed, in a nice way. I never wanted to change my hair-do, my style of clothing or class schedule for fear of being noticed. I wanted to slide through and get out. The emotional pain-potential was too high.

As a young adult, I was racked with insecurities. I worried. I wanted to be approved by others. The invisibility cloak I gave myself was added poundage. I hid under the subcutaneous layer of fat. People ignored me. I got approval in other ways.

Then I woke up and discovered who I was without the poundage. I entered the world without it. I was freaked out at the attention I received. People,  especially men, looked at me differently. I was sexually attractive. Even attractive women noticed me. I entered the exclusive “Beauty Club”.

Things changed again after marriage and children. People didn’t notice me again because I was a stay-at-home mom with two children. What did I matter to the world? I was a frumpy nobody.

Then I entered the work world again. I was in a high-profile positions and the boss’s prize pet. Then I was the goat of the office whom everyone blamed. I didn’t agree with the boss. I was ostracized.

Being invisible at age 51 yrs. old is much different from being invisible at 17 yrs. old. Life tossed me the ups and downs; the losses and triumphs. I was left a shell at mid-life. I grieved in my cocoon.

I again have emerged. Now, being invisible, is being cloaked in a level of confidence. I watch events fold open before me. I now know why people have wrinkles, grey hair, wear red hats and purple dresses. The hormones are gone. We’ve been through hell and back and we’re older and wiser.

I’m like a squirrel in a tree. My tail is switching back and forth and the dog below can’t see me. I’m invisible. I’m in control.

Invisibility was self-imposed as a teenager to preserve my identity. It is self-imposed now to ensure my air of confidence and spirituality. It is what it is. I am who I am.