It’s been nearly one year since our oldest son moved out after finishing college and made my husband and I official empty nesters. I had been so used to running around organizing other people’s lives for the past 24 years that I discovered that I didn’t have to do that anymore.  I heard someone say once that if you don’t know what to do, then don’t do anything. For me it has been a year of transitions and a lot of doing nothing.

At work, there has been chaos, and I chose not to get involved. Staff are leaving, transferring, and retiring. New young staff are being hired. They are old enough to be my children.

At home, my husband got a new job, our son announced he’d be moving to Australia by the end of the summer, and my daughter has a boyfriend.

So as my nest has emptied, I have watched other women fill their nests. I have crossed paths with more pregnant women this year than I can ever remember. I have purchased six copies of my standard baby gift, Your Child’s Health, a great reference book for parents. I have also crossed paths with pregnant birds.

This Canadian goose was in a median in a university parking lot. The poor dad goose was siting on the eggs and wouldn’t leave. Someone brought him a bowl of water. I ran out and brought back some tortillas for him to eat.

At our neighborhood park there have been five Canadian Geese families that have taken over the pond.

So as to not feel left out, on my own back porch, a robin family made a nest one weekend when we were out of town.

The baby robins stick their heads up and all we can see are little beaks and necks.

Mama robin is very vigilant and busy hunting for food for the babies. 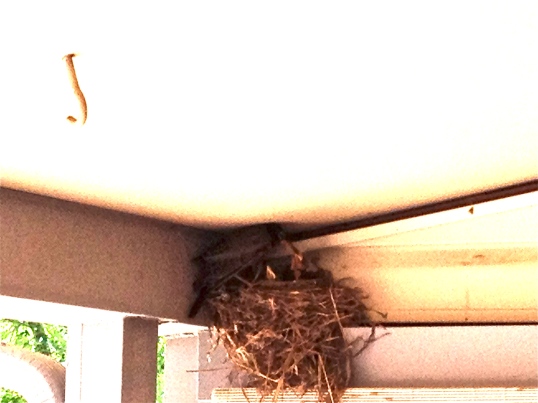 Nature took over and filled my nest again. I’ve had a perfect view of it all watching life unfold and still not doing anything…waiting for my next move.